As well as the usual Saturday charter market there was also a Farmers’ Market of local produce such as fruit and vegetables, bread, cheese, cakes and locally brewed beers and cider. In Market Place Andrei Lussmann and Mat Gomes presented creative kitchen cookery demonstrations whilst the museum staged an exhibition titled A Brief History of Food & Drink.

There were plenty of photo opportunities during the weekend and food makes a very appealing subject! In addition to the food photography, the displays and demonstrations were fun to capture.

The gallery here shows a small selection of some of the photos I took. The creative cookery demonstrations were aided by an overhead mirror which provided some excellent views of the chefs at work.

As the Summer draws to a close many theatre companies are starting a new season. In Hertford, The Company Of Players opened their new season this week with a production of Blithe Spirit, directed by Paul Morton. 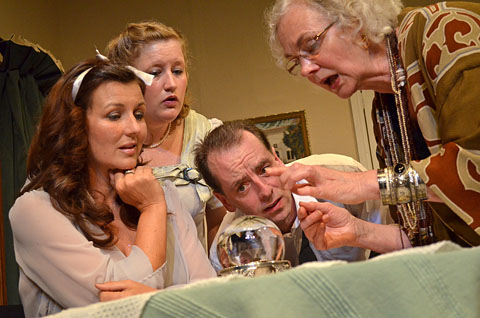 The Company is celebrating it’s 50th year and the opening night was attended by Sir Ian McKellen, who is president of the Little Theatre Guild of Great Britain, of which The Company is a member.

I do a lot of work for CoPs, who perform in a small 63 seat theatre close to Hertford town centre. The building was originally a school house and was purchased by The Company in the sixties. The size of the theatre means that you work very close to the stage and can get some excellent angles and close-ups that would be hard to achieve in a full sized auditorium. The downside for the performers of course is that they’re more than usually aware of the photographer in their midst.

Photo Gallery: Blithe Spirit
(from The Company Of Players website – opens in a new window)

I had a great day photographing Rock At The Castle on Sunday. The event is one of the bookends of the Hertford Music Festival, this year marking the start of the three week festival with a line-up of bands that included The Ghost of Samantha, The Huxleys and Suburban Dirts.

Despite a worrying forecast of prolonged showers, the afternoon turned out to be mostly dry and sunny, with just a five minute flurry of rain.

As usual, I cast my lens around to capture the atmosphere both on stage and in the castle grounds. As a sponsor I was also able to take advantage of a backstage pass that allowed me to take shots from the back of the stage as well as in front.

You can either click on the images below to scroll through the gallery or view an on-page slideshow.

I have two more music events to photograph this year – Rockin’ The Car Park at The Farmer’s Boy in Brickendon and the fantastic Wilkestock, which this year is a three day event (after which I’ll probably need a few days off!).

To find out more about my event photography services just visit www.steve.beeston.co.uk/event-photography.asp.

My first big event of the Summer this year was Hertford Carnival, which returned to the town after a 12 year absence.

As well as the traditional procession through the town there were arena events in the grounds of Hertford Castle, a funfair on Hartham Common and a collection of classic cars.

I love photographing Summer festivities – there’s so much going on with so many people enjoying themselves and consequently lots of photo opportunities.

A complete slideshow of photos is available at www.hertford.net/pictures/2012/carnival.

I’ve recently finished work on a project providing material for a small exhibition about the history of Hertford Brewery.

The exhibition forms part of a new Sainsbury’s store in the town, which occupies the site of the former lager building of the brewery, which has been run by the McMullen family since 1827.

The client was Museums & Heritage Consultant Val Bott, who was commissioned by Sainsbury’s to work on the project. My brief was to photograph the modern brewery in operation and supply photos of old advertising posters from the company’s archive.

For the archive material I was ably assisted by Val, who removed many of the old posters and advertising materials from their frames so that I could photograph them. I used ambient daylight rather that dedicated lighting equipment, providing a wider diffuse natural lightsource.

In post-production I then used Photoshop to correct lighting levels and sharpen the images using a high pass filter.

A couple of items presented interesting challenges. One large poster was in poor condition physically and had to be photographed on the floor. As I was unable to get directly above the poster due to it’s size, so I photographed it from angle of about 30 degrees, which was later corrected for perspective in Photoshop. Another picture was wedded to it’s frame and had to be photographed in such a way as to minimise distracting reflections in the glazing. Again some post-production editing was necessary.

Overall this was a rewarding assignment that is typical of the work I enjoy. The results will be on display when the store opens later in the month.

I’m delighted to be sponsoring Hertford Music Festival for a second year. This is one of two events I sponsor, the other being Run For Their Lives, a 10K charity fun run. As part of both events I provide photographic services, both on the day and for promotional materials in the weeks leading up to the events.

On Saturday I met up with Festival organiser Kev Saunders at Rigsby’s guest house and restaurant in St.Andrew’s Street, Hertford. The business is the festival’s main sponsor and the brief was to shoot some promotional material featuring some of those involved with the festival using the location and branding as a backdrop.

Every job comes with its opportunities and challenges and this was no different. On the plus side we had an interesting location, accessible branding and good weather. On the downside we had the combination of bright sunlight and shadow.

I took a variety of shots in different locations and these two compositions appear to have worked best.

With bright sunlight you’re always in danger of either shooting into the sun or having your subjects facing it and squinting.

With both of these shots I’ve used Photoshop to adjust the levels, lighten the shadows and add a vignette. In the top picture I’ve also used a high pass filter to add local contrast after lightening the shadows, which has given it an almost stylised look.

Hertford Music Festival opens on Sunday 6th August with Rock At The Castle and runs for three weeks until the Musical Mystery Tour on Sunday 26th August.

Another theatrical assignment at Hertford Theatre! Last night I photographer the dress rehearsal of Arabian Nights, presented by the young wing of Hertford Dramatic & Operatic Society.

This is an annual presentation by the group, known as the Young Idea, and gives the performers valuable experience working on a professional theatre and in front of a paying public. The production is staged for four nights, plus a matinee on Saturday.

As well as photographing the production for HDOS I also provide prints and photo CDs for cast, crew and proud parents.

I dropped in to Hertford Theatre yesterday to take some shots of The Company Of Players’ rehearsal of “A Few Good Men”, which is their Theatre Week entry for 2012.

The production is one of six plays being staged as part of the annual festival in Hertford.

My aim was to get a range of shots, showing the production in rehearsal, including actors (both on and of stage) and crew.

At the end of the week I’ll be photographing the winners after the awards ceremony on Saturday night.

It’s been a busy month for theatrical photography. Earlier in the week I photographed three episodes of Fawlty Towers at Hertford Theatre. The three acts features The Hotel Inspector, The Germans and The Kipper and The Corpse.

Many productions have their own special challenges and this was no exception. The first and obvious challenge is that the action comes thick and fast. This is partly offset by the fact that the plotlines are well known, but the principal characters are quite animated, so there’s lots of movement (with the exception of The Major, Miss Tibbs and Miss Gatsby of course). So, relatively fast shutter speeds are the order of the day, and this means wide apertures and/or high ISOs. Given that the lighting was in general very good, I took a risk and chose ISO400 and shot in Aperture Priority. This typically gave me speeds of around 160th or 250th. I might have chosen ISO800 or even 1600 but I wanted to minimise noise, albeit at the risk of a few blurry photos!

The second challenge was the set. The action of Fawlty Towers takes place in a number of locations, including the lobby, dining room, bar and bedrooms. In this production, all of these locations were incorporated into a single set, using zones for each room.

The centre of the stage represented the lobby, whilst the bar and dining room were set to the left and right, with view of the kitchen beyond the dining room. Cleverly, the bedrooms were quite literally on the first floor. All of this made for some interesting sightlines, not to mention giving the lighting technicians a few challenges.

I shot the bedroom scenes from the top of the raked seating at the back of the auditorium using a 55-200mm lens (APS crop-factor of 1.5 and a 35mm equivalent of 300mm). This gave me an adequate view of the staging, which is probably more than could be said for the audience in the front row.

Some of the bar and dining room scenes presented issues due to the restricted space and lighting at the very edge of the stage, but I was able to capture some perfectly good groupings nonetheless..

There was also a short scene set in the kitchen, where only the characters heads are visible. This again, was shot from halfway up the raked seating, allowing views over the top of the saloon doors. Unfortunately I didn’t get an ideal view as I should probably have been a little further up.

I find that setting the colour balance to tungsten often works well for stage lighting. The lighting angles during this scene created some quite strong shadows so I used Photoshop to raise the levels a little. The green cast represents the way the scene was lit.

If you like to find out more about the theatrical photography services I offer, please visit www.stevebeeston.co.uk.

S7AAPXPS47UX Yesterday I photographed a production of The Producers, presented by Hertford Dramatic & Operatic Society. This was the final dress rehearsal before the opening night and despite the technical challenges, the cast and crew didn’t let the last minute hitches distract from what is clearly going to be an excellent show.

From a photographic point of view there were lots of excellent shots to be had, with lots of movement and physical comedy.

The show was well lit, which is always a help when there’s lots of movement, especially during the dance numbers.

There were also lots of opportunities for close-ups and facial expressions.